Anna Girolami writes about Edwina Currie controversies as she runs as a Conservative candidate for Whaley Bridge. 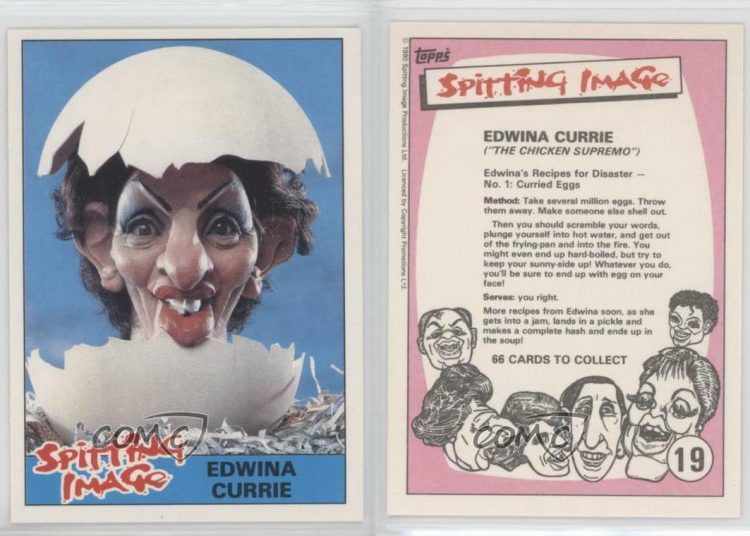 This picture is available at https://www.ebay.ie/itm/1990-Topps-Spitting-Image-Edwina-Currie-19-0w6

Purdah – a term previously used to describe the period leading up to an election, commencing on the date the Notice of Election is published and ending at the close of the poll on election day.

Was ever anyone more aptly-named than Edwina Currie (yes, yes. I know she calls herself Currie Jones these days but, frankly, where’s the pun in that?). She’s undeniably highly flavoured but definitely not to everyone’s taste.

Her latest stunt (of which more below) looks, as usual, like an attempt to hog centre stage even as she breaks the rules to do it.

That’s vintage Currie really. Her entire career is an endless series of screen grabs. Her one thought over the years has been to scramble into the limelight and then stay there. But this constant craving for the next hit of publicity means that her judgement is always playing catch-up.

Let us not forget that this is the woman who said she had complete confidence in Jimmy Savile as she handed him the keys to Broadmoor. Last week, she announced on national television that she doesn’t want unvaccinated people in the same train carriage as her. One wonders how she expects the young adults of Whaley Bridge to commute into Manchester. A few years ago, her husband had to drag her away from the keyboard after she tweeted that food banks were letting poor people fritter away spare cash on dog food and tattoos.

Freed from the respectable trammels of government, Currie has been able to indulge herself to her heart’s content. Strictly, Come Dine, Bargain Hunt – she’s done the lot. One day ITV4 really will create a reality show about the opening of an envelope and guess who’ll be first to show up?

In High Peak, where she lives, this lack of judgement occasionally has explosive results. Inevitably, it’s local people who get hit by the fallout.

As President of Tideswell Male Voice Choir, her leadership took the group to an employment tribunal and a payout of £8000 to its previous conductor. In 2016, she tried to get the head of the local Conservative Association off the hook when he was convicted of stealing £3000 from the Poppy Appeal. None of this exactly screams her suitability for local government.

Because now, twenty four years after she last held office, Currie is trying again. She is standing as the Conservative candidate for Whaley Bridge in May’s county council elections. You can see how it would happen. Somebody, somewhere dangled the carrot of an election campaign in front of her. How could she resist?

She needs to behave herself. She is bound by exactly the same rules as all the other candidates. Even if she has appeared on Celebrity Wife Swap.

Candidates are subject to the Local Government Act of 1986 (section 2, to be precise). There is a friendly user-guide which makes things crystal clear:

“You should not arrange proactive media or events involving candidates.”

But it seems that this particular candidate either doesn’t understand the guidance – or doesn’t care.

Last Thursday, a smiling Currie was followed around Whaley Bridge by a film crew, while she interviewed local people. The result was intended to be broadcast on The Andrew Marr Show yesterday. It’s OK though. Currie said it was impartial as she does mention the other candidates. Even if nobody else got their own cameraman.

Let’s be clear what’s happened here. Edwina Currie snaffles herself a slot on national telly to big up local businesses in the very place where she wants to be elected.

“You should not arrange proactive media or events involving candidates.”

Who paid for the film crew, I wonder?

As it happens, the film has not yet aired. Political campaigning has been temporarily suspended following the death of the Duke of Edinburgh.

Let us hope that the good people of Whaley Bridge are not so star-struck that they put celebrity before community. A county councillor must prioritise the needs of the people they serve above the needs of their own ego. Currie has shown, over and over again, that she will never be able to manage that. Perhaps she should stick to pantomime.