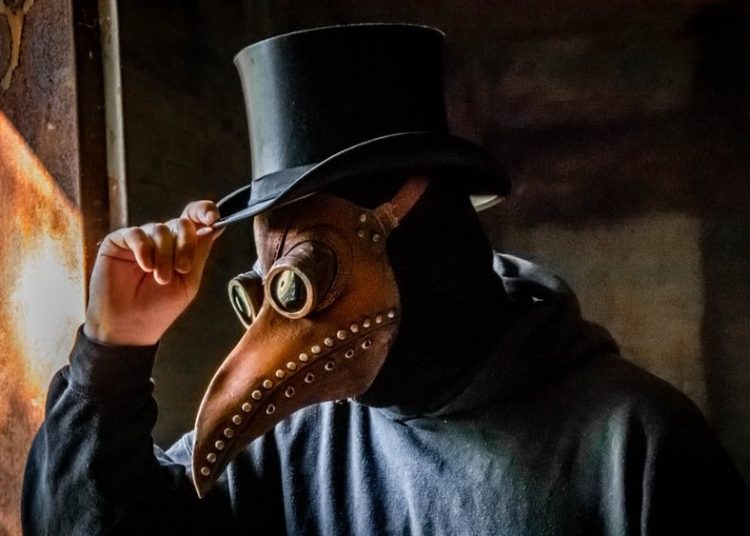 Earlier this year on 8 March, the death occurred of the Swedish actor Max von Sydow, whose breakthrough role was the Knight playing chess with Death during the Plague in ‘The Seventh Seal’. I had recently seen the film in its entirety for the first time and thought that, despite medical and scientific advances, epidemic control has not much changed since 1348. Those of you who have seen the film can debate whether self isolation worked, or what advantage was gained by the rule of six.

Those seeking parallels to our current situation have tended to look at the Black Death (1347-1351) or the Great Plague of London of 1665, and in our region the self-sacrificial story of Eyam, but having studied crisis mortality in Northampton between 1571 and 1640 I believe I can offer some closer comparisons.

The current government’s response to Covid-19 implies that pandemics are new and unexpected but that we will survive through ‘world beating’ innovation. The government of Elizabeth I prepared for any future outbreaks of Plague in 1578 by issuing ‘Orders thought meet by Her Majesty and Her Privy Council to be executed … in such … places as are … infected with the Plague’. These were templates building on Italian experience and reissued every time there was an outbreak. Although the advice was national, implementation was in the hands of local government.

The advice implemented by Northampton in that year, was that all houses ‘visited’ by the disease should be shut up (with ‘Lord have mercye uppon us’ written on the door) and remain so until 20 days after anyone had died in the property. Those who could provide for themselves did so and the town provided for the rest. A monthly assessment was to be made and levied in the infested wards, and purveyors appointed to buy victuals for the infested houses. In theory we have regressed since Good Queen Bess’ days!

Two months into the epidemic, the Northampton authorities appointed people to ensure that the regulations were followed and to deal with the dead. An article published on 28 April in the Tortoise Sensemaker Daily described the modern response in London:

At the moment, London authorities have set up special teams to roam the city – ‘Pandemic Multiagency Response Teams’ (PMARTs) – made up of police officers, firefighters and health workers. Their job is to deal with deaths in homes. They ‘confirm life is extinct, confirm the deceased’s identity and establish there are no suspicious circumstances’. They also ‘prepare the deceased to be collected by an undertaker to take them to a funeral home or mortuary, until arrangements can be made for burial or cremation’. Wrapping the bodies of victims of infectious disease is hard, dangerous work. This has all been improvised: is that good enough?

This had this been anticipated in Northampton in 1578, but also in London in 1592 with the ‘Orders to be used in the tyme of the Infeccon of the Plague within the Cittie and Liberties of London’ which stated:

that in or for every parishe there shalbe appointed twoe sober Anciant Woemen, to be sworne to be viewers of the bodies of such as shall dye in tyme of infeccon, and twoe other to be viewers of such as shalbe sicke and suspected of Infeccon: which woemen shall immediately, upon suche there Viewes by vertewe of there Oath, make true report to the Constable of that precinct where such person shall dye or be infected…

All that has happened in the last 520 years is that the job has been opened up to a wider demographic. As the picture shows, full PPE is not a modern invention.

Are there other lessons from the past? An Act of Parliament of 1604 gave teeth to local authorities, in that watchmen were given legal authority to use ‘violence’ to keep the infected in their homes. Those who did go out could be whipped or, if they tested positive, hung. There were regular visitations of the plague, and the common factor was that they were spread around the country by people or parcels from London.

When plague returned to London in 1603, the Northampton Assembly passed an order forbidding anyone from the town travelling to London without specific permission. If they returned without permission being quarantined would have been the least of their worries. Stamford had four outbreaks between 1574 and 1641. Its position on the Great North Road may be a contributing factor, but was this compounded by Elizabeth I’s chief minister having his home just outside the town at Burghley? Ministers and SPADs (special advisers) seem to escape whipping.

A modern study of quarantine during the 1636 outbreak in Westminster has relevance for our times.

Throughout outbreaks, the government asserted that plague control measures were acts of public health for the benefit of all. However, contrary to this government narrative of disease prevention there was a popular narrative that portrayed quarantine and isolation as personal punishment rather than prudent policy. Printed government orders called for the equal implementation of plague policy for all individuals, but handbills and other mass-produced writings contradict this egalitarian vision. … Quarantine and its effects were not classless, and its implementation was not always strictly in the name of public health.

There was serious conflict between puritans and high Anglican church officials in Northampton on this very point.

We are being told that the response to the current crisis follows the science. This may be true. We are repeating the past, and I will end with the sobering words of Paul Slack:

“All that historians can say about future pandemics, if they are not snuffed out before they start, is that public and private responses to them will be necessary, inevitable, and divisive, and no more certain to succeed than they were in the past.”