The Government promised farmers would get more support payments with their oven ready deal. Without this being law, it's hard to believe it will happen. 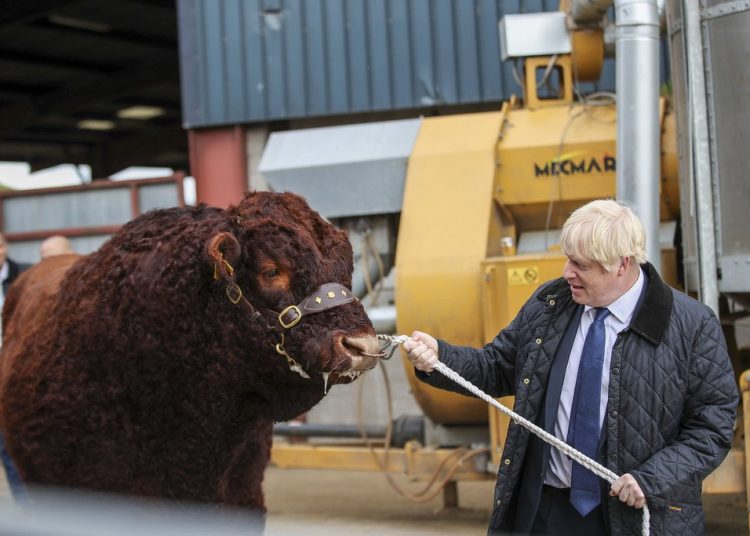 "Darnford Farm in Aberdeenshire" by UK Prime Minister is licensed under CC BY-NC-ND 2.0

As a big fan of 70’s sitcom Dad’s Army re-runs, I can’t help noticing there seem to be certain analogies between the TV programme and the current predicament of UK agriculture.

Like most farmers, I have to be an optimist and always expect the weather to be kind, yields to be good and prices to be high for my produce. In reality, it is usually a curate’s egg of a year with good bits and bad, but this year appears to be more like a verger’s egg. In other words, it has been a bumbling lick spittle mess of a year with everything conspiring against us. A bit like the way Mr Yeatman, in his eagerness to please the vicar, always says and does the wrong thing.

My oilseed rape has been a disaster yield wise, with a measly 0.62 tonne per hectare, despite the fact it all came through the winter looking small but well. The incessant wet followed by the scorching dry and relentless flea beetle attack has taken its toll. The wheat was slightly better with a yield on 7.9 tonne per hectare of a 25 per cent reduction on a good year. Spring barley is looking good so far with one field doing 10 tonne per hectare, but I am not convinced the others will do as well.

Getting back to Dad’s Army: we seem to be being led in Westminster by a Captain Mainwaring character who has little knowledge of what he is doing, reacts in a knee jerk way to situations, and thinks if he says a few enthusiastic platitudes everything will be fine. Take the Agriculture Bill which has now finished its passage through parliament. The golden opportunity to set our leading standards of welfare and the environment in statute so that they would not be undermined in any trade deal with the US, or other country, has been squandered due to his desperation for a deal with anyone at any cost.

The UK holds very few cards and I can imagine the US being like Private Walker rubbing his hands with glee as he spots a desperate punter to take advantage of. We are constantly told that nothing will be allowed in that is below our high standards. If this is true then why are thousands of tonnes of oilseed rape being allowed in that have been grown using neonicotinoids? Will this stop at the end of the transition period? I doubt it. How can we trust the Government without it being protected by law? They promised oven ready deals with the European Union (EU), and told us it would be the easiest thing in the world to make an agreement, and farmers would get more support payments.

These are just some of the lies we were told, and many people believed them. I think that if Private Jones were to be given charge of organising things in the event of no deal, he could have done a better job. Look at Chris (failing) Grayling and his supposed ferry company that had no ferries. Are we heading towards an agriculture policy similarly devoid of any agriculture? All the talk of public money for public goods is a meaningless sound bite.

Some of us are involved with the Save British Farming campaign. The Daily Mail has even mounted a campaign to ‘Save our family farms,’ as those farms seem to be the most vulnerable going forward. I’m not going to use Private Fraser’s favourite line of “we’re doomed”, because the world will keep turning and the land will be farmed, albeit by many fewer farmers. Remember the miners, the car workers, the ship builders and how they were treated during the 70s and 80s? Now it is the turn of UK agriculture to get the same treatment, and most farmers seem to be adopting the Sergeant Wilson approach of raising an eyebrow, smiling wryly and carrying on as if nothing was happening. I for one am not going to take this lying down and will fight for what is right just like Private Sponge, who incidentally was also a farmer, and his platoon.

‘Who do you think you are kidding Mr Johnson…?’

Andrew Brown is a Rutland farmer born and bred. He is a past High Sheriff of Rutland. He also sits on the Leicestershire and Rutland bench as a magistrate. The farm is 60% arable and 40% permanent pasture. The farm is in a major conservation scheme which has planted pollen and nectar strips and wild birdseed plots as well as installing a permissive bridleway for local residents and a 3Ha community woodland. The farm has won several local, regional and national awards for his conservation work whilst maintaining a viable and productive commercial farm. He hosts school trips and goes into schools to promote British food and farming. He is a former NFU East Midlands Regional Chairman. He has been on the Board of the HGCA and is on Farmers Club Committee and former Chair of Membership and is a Professional Fellow of the Institute of Agricultural Management, a member of the Commercial Farmers Group, the Worshipful Company of Farmers and has achieved the status of Chartered Environmentalist. He has been awarded the Fellowship of the Royal Agricultural Societies. He is a Freeman of the City of London, a former Trustee of the Rutland Agricultural Society and current trustee of the Leicester Comedy Festival. In 2017 he won the Leicester Comedy Festival ‘Stand-up Challenge’ and has done comedy gigs in various locations around the country and even as far afield as Tasmania. As well as having an engineering degree he has recently gained a post graduate law degree with merit from De Montfort University. He states that, ‘Good farming practice and good environmental practice go hand in hand, and it is essential we get the message across to the public that UK farmers produce some of the best agricultural products in the world to the highest standards of welfare and the environment, and with climate change and population growth, farmers must step up to the mark to help feed the world without destroying it’.