Stratford-upon-Avon has declared a climate emergency, but are they really as keen to be green as they would have you believe? 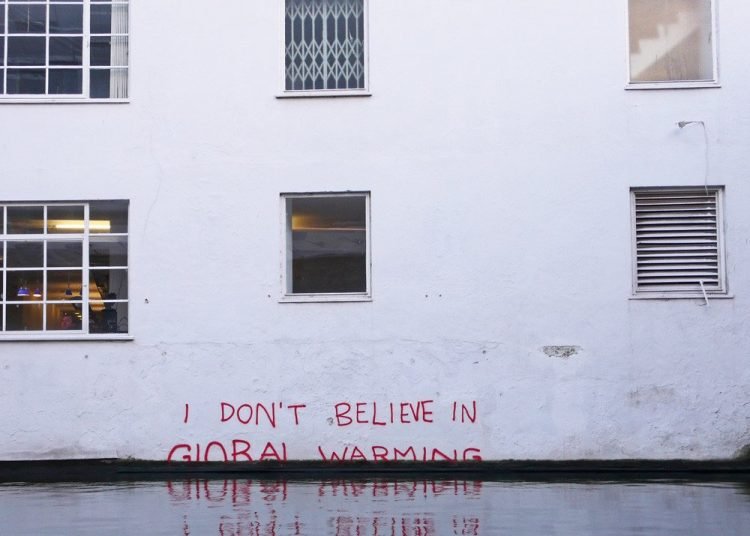 "“I don't believe in Global Warming”: Climate change denial by #Banksy" by dullhunk is licensed under CC BY 2.0

Tory-run Warwickshire County Council flaunts its green credentials. It even declared a climate emergency in 2019. However, a press release from a group of local organisations including Stratford Climate Action and local branches of Extinction Rebellion, Stratford Youth Strike 4 Climate and Warwickshire Climate Alliance, has drawn our attention to the climate sceptic position of Councillor Peter Butlin.

Butlin is deputy leader of the county council where he also holds the finance portfolio, and sits as councillor for Admirals and Cawston ward in Rugby.

The council has established a cross-party Climate Change Task and Finish Working Group, and launched a £1 million community fund for local schemes looking to reduce carbon emissions and address the emergency.

‘As an organisation we will embed climate change considerations into everything we do, making carbon reduction everyone’s responsibility. Climate change will be considered as part of all council decision making including our capital investments and procurement processes. We will ensure we have the right information to enable us to prioritise our decision making based on understanding our own emissions and how this impacts on Warwickshire. We will look at best practice to inform our own benchmarking and target setting, helping us to prioritise and plan accordingly. We will work collaboratively with Government to provide guidance and incentives for carbon reduction.’

So far, so good, but there’s an elephant in the room. Mr Butlin is standing for re-election on Thursday and his views seem a little at odds with the council’s plan and the commitments made by his party.

Butlin appears to disagree. He has retweeted several negative posts about renewable energy, across a range of issues including their costs, their efficacy and one notable tweet that claims wind power is ‘environmentally harmful’ and ‘rewards the rich’.

Some of his tweets repeat familiar right wing tropes, such as that of the UK becoming ‘a third world country’ because of liberal/green measures on climate change. He also retweets such luminaries as ‘Lozza Fox‘, the definitely non-Tory candidate for London Mayor and with whose bizarre views perhaps Mr Butlin has some affinity.

He is on record as saying in 2018 in the Stratford Observer: ‘I have yet to see real evidence that man’s CO2 emissions are a climate driver.’ He has added comments to retweets that support this view, saying ‘net zero is an expensive (dystopian) pipe dream’ and that it would be ‘insane’ for Boris Johnson ‘to even consider’ banning UK oil and gas exploration.

So what do Mr Butlins’ Tory colleagues on the council think of him? Thus far, they have declined to comment and neither could we find a Conservative manifesto for the coming elections (we have asked but not received a reply to date).

Three weeks ago, however, there was a climate hustings where his opinions were raised with Tory councillor Heather Timms (who holds the portfolio for Environment and Heritage & Culture) by Councillor Chilvers of the Green Party. She said nothing about Mr Butlin but simply pointed again to what the council has done.

This does not bode well. If Mr Butlin remains as deputy leader of Warwickshire County Council, we have to conclude that he would inform any council commitment to climate change. Even if he does tweet that ‘all views are my own’.

Approached for comment, Councillor Jonathan Chilvers, Green Group leader at Warwickshire County Council said ‘Conservative County Councillors say they’re taking climate change seriously, but keep in post a Deputy Leader in charge of finance who doesn’t believe it’s real and actively argues against it. If Cllr Butlin wants to say that we should ignore this threat to our future that’s his choice, but his Conservative colleagues should not be propping him up as Deputy Leader in charge of tax payer’s money while he does it.  We need significant urgent evidence-based investment to address the Climate Crisis, including here in Warwickshire.’.

Perhaps the people will speak on Thursday? Perhaps the Tory group will not reselect him as deputy leader?