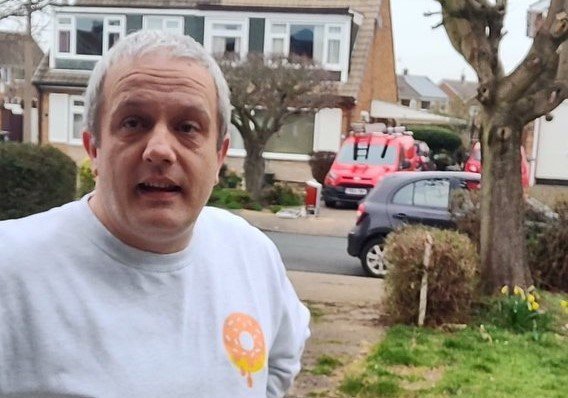 “Journalism is printing what someone else does not want printed; everything else is public relations.” I pull up the slide on the screen, and with this quote (much misattributed to George Orwell) conclude my presentation. A dozen teenagers, returning to the classroom for the first time in months, are still reading the quote as I pack up my stuff.

This is Tuesday afternoon, and I’ve just finished my class I give, as a lecturer in journalism, on the concept of truth to power. I touch on Daphne Galizia, Carole Cadwalldr, Amelie Gentleman, Woodward and Bernstein (of course) and the struggles they faced. “But don’t worry” I tell them “You’re more likely to get a narky tweet about a piece than anything else”.

Wednesday. I’m working from home, and there’s a knock on the door. This is not exactly uncommon: especially in these days of home delivery. But the guy I open the door to – a stocky grey haired late middle-aged man with an angry face is a surprise. He’s not holding a parcel, or a crate of shopping. He has nothing in his hands at all, but is still using them to gesticulate wildly at me.

He refuses to tell me who he is – “You know who I am!” he insists, incorrectly – and as I grab my phone rightly realising that getting on this film might be useful for evidence should he turn violent, he tells me his name.

I’d written about him a couple of times before, and how he was a surprising choice of friend and colleague for our MP, who is desperate to portray himself as a cuddly, sweater-sporting, dog-walking family man. Husted was suspended by his party for some ripe remarks on social media about the Nazis, his constituents being ‘scum’ and suchlike. He also has an interesting history after being busted for cocaine possession and assault: a technicality at the subsequent court case saw him escape what would likely have been a custodial sentence.

He’s on my doorstep, demanding I take the articles down from Beestonia, the blog I’ve been running for about 12 years. It’s a surprise as the pieces he objects to have been online for well over a year.

He is outraged that I dared to print his name and do my job reporting on his nasty history. He demands I immediately remove all mention of him I’ve ever made. I tell him that this is absolutely not going to happen:in the years I’ve ran the blog I’ve had threats of violence, legal letters, annoyed readers ringing a former workplace demanding they sack me (wonderfully, my boss at the time told them that is was more likely I’d get a payrise).

I’ve never buckled, never retracted things I’ve carefully worked on to assess their validity. I am dogged: when two Tory councillors verbally abused me in the council chamber following a meeting I was attending as a journalist, the subsequent fall out led to a lengthy investigation, and the Local Government Association forcing an apology and compensation from the council.

In all that time though, I’ve never been door-stepped, especially during a pandemic by a man clearly flouting the rules. I demand he leaves my property and he refuses three times. I slam the door on him. My phone buzzes. He’s now found me on Facebook and is sending messages, thinly veiled threats of violence if I don’t remove the post.

I lock the door, and ring the police.

My wife, who is currently 7 months pregnant, reacts badly to the incident. She’s terrified, and later that day has to be taken into hospital to check the baby is ok (thankfully, it is). The police arrive, and put it down as clear harassment. They advise us to be vigilant, keep the doors locked, and they drive up to Husted’s house, where they give him a harassment warning with the threat of instant arrest should he approach me again.

I’m staggered by it. I’m fine with legal threats, but what type of human – and one who is employed directly by our local MP – thinks this is a good idea? What has emboldened them to think they can go around treating journalists like this? Is it the current government’s recent approval of breaking the law themselves? Is it the Draconian excesses of the criminal and policing act, where protest is effectively outlawed? Is it the continued readmission to the Conservative Party of elected councillors and activists after they’ve made blatantly racist and bigoted remarks online? Or are all those part of the same malaise that led Carl Husted to my door, a moral blackhole spinning around its Downing Street centre?

After a social media uproar, Darren Henry puts out a statement via Twitter offering a half-hearted apology ‘to a constituent’ and invites me to contact his office to talk it over with him. I refuse. I will be pursuing his involvement of the matter via my own methods, and do not accept his apology until he thoroughly and  transparently investigates the circumstances  behind Mr Husted’s harrassment.

Whatever, it must be fought against, and robustly. In the same presentation I gave on the Tuesday, I quote something that Nick Davies, the brilliant journalist who uncovered the phone-hacking scandal, related to Alan Rusbridger in the latter’s book, ‘Broken News’ “I got a hit a lot by adults as when I was a child…so deep down, under all these layers, that’s what drives me. I want to get my own back on people who abuse power and by good chance that’s what a good journalist should do”. It’s a line I take to heart, and one that will continue to drive me to fight the bullies who have taken over much of our current political discourse.

Addendum: Darren Henry’s wife Caroline Henry, who is by all accounts a close friend of Mr Husted, is standing to be Nottinghamshire’s Police and Crime Commissioner in May. Is Husted involved in her campaign? What does she think of her friends criminal activity?

Editor’s Note: we have asked some questions of Darren Henry MP and await a reply.