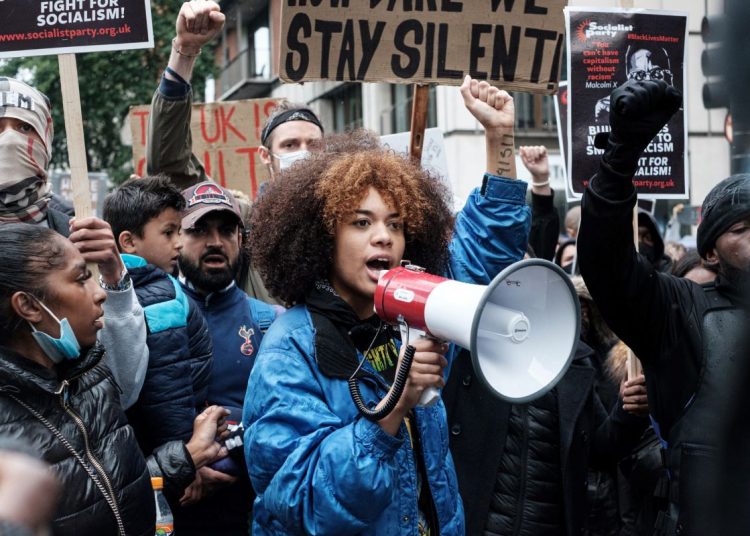 Anti-racism campaigners gathered in Stoke-on-Trent’s Hanley Park to mark the second anniversary of the death of George Floyd at the hands of police officer Derek Chauvin in Minneapolis.

The rally was organised by the Stoke branch of the global Black Lives Matter (BLM) movement and the Staffordshire Association for Black Lives Equality (SABLE).

Addressing a crowd of around 40 people gathered at the park’s historic bandstand, Sarah Chevolleau the chair of SABLE said that despite widespread public outrage following the death of Floyd there had been “little change” in addressing institutional racism.

Government and big business on both sides of the Atlantic had, Chevolleau said, been quick to portray themselves as supporting the struggle for equality but had failed translate this into concrete action to challenge institutionalised prejudice. An example of this being the treatment of Child Q by officers employed by the Metropolitan Police.

The problems caused by institutional racism were said to be seen closer to home in the way Stoke-on-Trent City Council had responded to requests to engage with BLM campaigners.

Only two Labour councillors had made donations to support the work of SABLE and the council had made only limited steps towards promoting initiatives like Black History Month. This despite the fact that they had tried to use their involvement with the group to claim they were being proactive in working to make the council and city more inclusive

The reality was, Chevolleau said, that Stoke-on-Trent is a city with deep seated problems around racial equality that the council in its current composition is not capable to address. She added that what was needed was not more discussion, but concerted action to “make Stoke an anti-racist city”.

Other speakers at the event echoed these concerns, Bex described the killing of George Floyd as “a modern-day lynching”, Ollie said it had “ripped the lid” off institutionalised racism in America and the UK. Adding that those trying to “call out” prejudiced attitudes were being attacked by government attempts to restrict their right to protest.

Kev, a member of Disabled People Against Cuts said politicians who try to claim racism does not exist in the UK needed to be “challenged” at every opportunity. Jan, a member of local anti-racist campaign group NORSCARF spoke about the institutional racism she had encountered amongst her colleagues in the teaching profession.

Leroy, a member of SABLE said there had been some improvement over the past two years, citing footballers taking the knee and better representation in the media, but things were still moving far too slowly.

Chevolleau said that the time had come for the struggle to move into a new phase, one where ‘allies’ took a more active role. Although she will be remaining in post as leader of SABLE and continuing to speak and campaign, it was time for new voices and leaders to come to the fore and show that the fight for equality is something that involves everybody.