An evening with Dominic Grieve 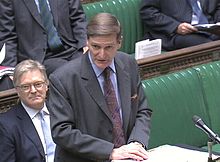 Grieve hardly needs an introduction. He was MP for Beaconsfield from 1997 to 2019 and Shadow Home Secretary in 2008-09. He has been Chair of the Intelligence and Security Committee and Attorney General. He is a Queens Counsel, a Bencher of the Middle Temple and a Privy Councillor as well as president of the Franco-British Society, a visiting professor in Law at the University of London and a trustee of the Oxford Centre for Islamic Studies.

In September 2019, Grieve joined 20 rebel Conservative MPs to vote against the government to try and block a no-deal Brexit. Subsequently, all 21 lost the Conservative whip.

He took us through the events which have brought us to today’s position. He pointed to the East Midlands as a Vote Leave hotbed during the 2016 referendum because of topics such as immigration and economic stagnation. The Leave narrative was effective in presenting all ills as coming from the EU whilst assuring us that we could leave at no cost. This narrative resonated with those who had seen their income stagnate and were looking for change.

Grieve recalled working to join the EEC during the 1970s. Britain was in slow decline and membership of the EEC was seen as necessary to arrest that decline. The Leave presentation of the UK’s ‘glorious past’ is simply wrong, he said.

But the Remain campaign failed to communicate that. People voted to leave and then the conversation changed. Hard Brexit or No Deal became the only path to ‘sovereignty’.

Prime Minister Theresa May tried to compromise but she was frightened of the Conservative hard right who took over the party, In the summer of 2019, she resigned and Boris Johnson eventually replaced her.

That autumn, Parliament failed to secure a second referendum and Johnson won a general election and a useful majority. On 1 January 2021, the UK left the EU with a deal.

The deal is unsatisfactory and incomplete. It guarantees free movement of goods but not free movement as we knew it. It is tariff-free but introduces additional costs in time and money. Companies with marginal profits have had to suspend trading. Fresh produce rots because of lengthy export times while new barriers to importing food from Britain have led to empty shelves in the shops of Northern Ireland.

There is a limited deal on security. Previously, we had real time access to the Schengen database. The UK made 603 million enquiries in 2020 alone. Today, we have to apply on a case by case basis and wait for consent.

The deal does little for the financial sector. On 1 January 2021, 5 billion pounds in Euro trading moved out of London in one day. Rishi Sunak might talk about ‘the future’ of the City but he has specified neither what he means nor how he will get it. Services beyond banking and finance are not mentioned at all.

Most remarkable of all is Northern Ireland – in order to take control of our borders, we have had to erect a new one inside our own internal market.

Grieve’s final lamentation concerned Erasmus. Why on earth abandon Erasmus? The only explanation is a culture war – sending students anywhere but the EU.

Nonetheless, the deal is a cause for optimism. It proves that Boris Johnson knew we needed it. Despite his attitude during negotiations, he knew no deal would create a carnage.

The deal is his acknowledgement that EU members are still our the most important trading partners. Australia, New Zealand or even the US cannot replace EU trade. The deal also offers pointers as to what we might do next.

We must stop talking about reversing Brexit. If we join the EU again, it will be a different membership. The rebate, the Euro and Schengen will all be part of the negotiations.

The UK is not yet ready for this debate but there are fights that we can choose now and that we can win.

We must stop the government repealing the European Convention on Human Rights. This would significantly damage our international reputation. We must use our membership in the Council of Europe and argue for full UK participation.

We can fight the unfinished issues such as Erasmus. If we play our cards well in the next two or three months, we can change the government’s position.

By fighting single issues, we will expose what a ‘sovereign UK’ really means.

Dominic Grieve concluded with this message: Brexit has not been done, it is not finished and problems will continue. Our success as a movement will depend upon which arguments we pick and how we win them. That is how we joined the EEC and that is how we will rejoin the EU in the next 5..10..maybe 15 years.