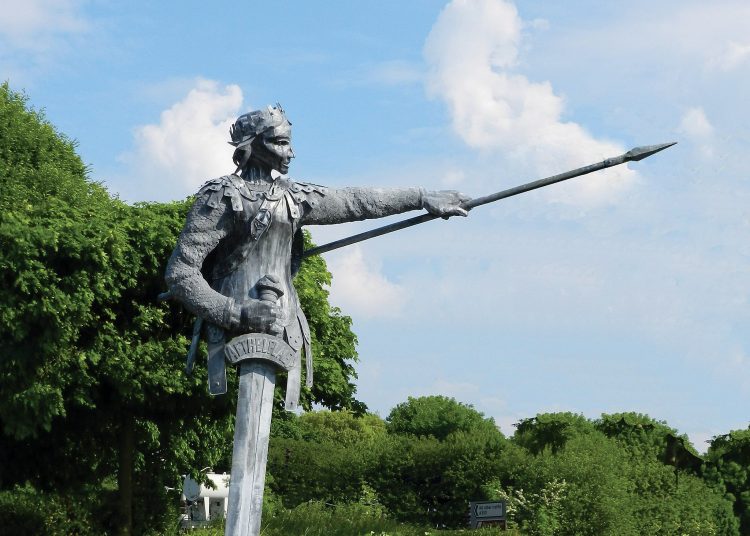 Take a look at our masthead. It’s the envy of all the other regional Bylines and we’re very proud of it. Our warrior queen logo is the work of Jayson Winters, Central Bylines’ very own Design Elf.

He took his inspiration from the statue of Æthelflæd in Tamworth. The town is roughly the geographical centre of the Central Bylines region and we have adopted the daughter of Alfred the Great as our mascot.

Some of you may already know of Æthelflæd, Lady of the Mercians. More, I suspect, will not. She wasn’t somebody we learnt about at school, unlike Boudicca or Joan of Arc. I confess that I know of her mainly through ‘The Last Kingdom’ –  the BBC/Netflix adaptation of Bernard Cornwell’s novels.

But Æthelflæd should be precious to all of us across the midriff of England as our champion and defender. By the time of her death, her domain of Mercia stretched from Lincoln in the north east, down through Leicester and Loughborough and on to Ledbury in the south west.

Before the Viking invasions, England was fragmented into seven major regions (the Heptarchy), with the Kingdom of Mercia bang in the centre, its capital at Tamworth. In the 860s, the Vikings started to challenge from the north and east and by 877, they had taken the eastern half of Mercia, leaving the west under the overlordship of the King of Wessex, Alfred the Great. He permitted Æthelred to rule the region as Lord. Mercia was a kingdom no longer.

Æthelflæd was Alfred’s oldest child but she was Mercian by maternal descent and Mercian by marriage. She and husband Æthelred set about fortifying Mercia’s major towns, protecting the region from further encroachment.

Æthelred fell ill and from 902, Æthelflæd ruled for both of them. When he died in 911 she continued to rule alone as Lady of the Mercians, an occurrence marvelled at by historians as unique in early medieval history.

Her political and military acumen appear considerable. She traded her southern cities of Oxford and London to her brother Edward, by now King of Wessex so she could rule Mercia unimpeded. Edward even sent his son and heir Æthelstan to be brought up in her court. From her, Æthelstan learnt piety alongside military experience. Both would prove useful in his later life.

By 913 Æthelflæd was fortifying Tamworth, preparing her assault on the Five Boroughs of Danelaw: the five major towns of Danish Mercia. The recapture of Derby in July 917 was her finest triumph and was quickly followed by the capitulation of the Danes in the rest of the region. By 918, she and Edward had regained Nottingham, Leicester, Stamford and Lincoln, towns that had been under Viking rule for fifty years. Mercia was whole once more.

She was a wily tactician as well as a competent war-leader. She successfully kept the Vikings out of Chester, first of all by letting them settle in the Wirral. When they attacked Chester anyway she defeated them by persuading their Irish soldiers to switch sides.

She died in Tamworth in 918, succeeded by her daughter, Ælfwynn (another unprecedented occurrence). By then, Edward had decided that Mercia should be under the control of Wessex as part of his mission to unite the heptarchies into one England and Ælfwynn ruled for only six months. Edward’s mission was ultimately completed by his son. Æthelstan was the first ‘king of all Britain’ and he was shaped by Æthelflæd.

Æthelflæd is an obvious feminist icon.There is no glass ceiling she didn’t smash or rule book she didn’t tear up. But we hold her in high regard too as uniter and defender of our region. She kept it from being subsumed by Wessex and she clawed it back from Danish possession in the north and east.

She established the midsection of England as a powerful and prosperous region in its own right. Here at Central Bylines we regard her as our champion and that is why she sits at our masthead.

Æthelflæd, Lady of the Mercians, we salute you.