A blog post by a UK Government adviser was deleted shortly after its publication on the LSE website as it didn't fit with government views. 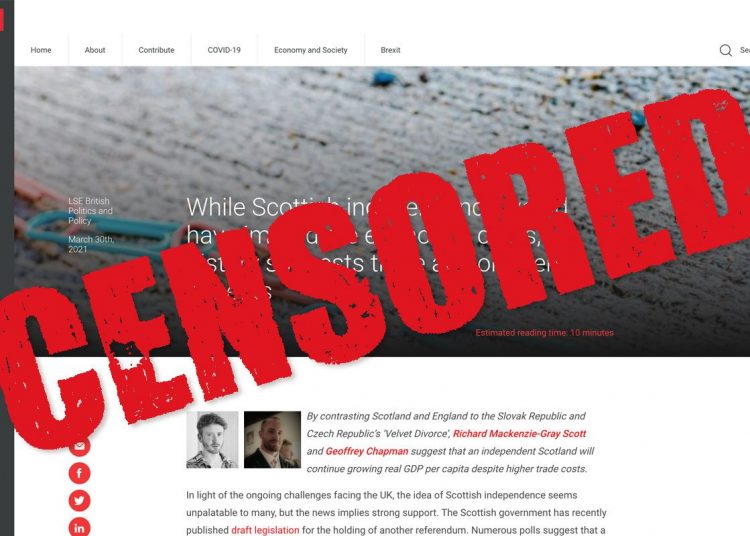 A blog post by a UK Government adviser, arguing there are ‘no reasons’ to believe an independent Scotland wouldn’t be economically successful, was deleted shortly after its publication on the LSE website on 30th March.

Having taken a keen interest in Scottish independence, I was about to save the encouraging report by Geoffrey Chapman and Richard Mackenzie-Gray Scott of the British Institute of International and Comparative Law when I was confronted with the message ‘content not found’.

The blog had gone. Unfortunately its conclusion was at odds with the UK Government line and Tory messaging that Scottish independence would be economically damaging. The authors therefore decided to withdraw it ‘voluntarily’ following pressure from Westminster. One wonders whether they will renounce their crime in due course and offer signed confessions.

Suppression of academic views coupled with skewed research papers paid for by the UK government is behaviour more typical of dictatorships rather than modern democracies. But it is no surprise. Yorkshire Bylines has already exposed how the Government has tried to “sell” Brexit by means of paid-for propaganda disguised as objective news stories.

These sinister methods are all of a piece with ‘operation bleach’, the erasing of references to the European Union in tens of thousands of laws secretly ordered by Downing Street, which I referred to here. They are, however, just the tip of the iceberg. If you want to know the full shocking story I can only recommend Peter Oborne’s powerful book, The Assault on Truth. This has, predictably, been boycotted by mainstream reviewers keen to keep their jobs. It describes the redefining of truth as whatever lies Johnson is currently telling, and the willing complicity of the media, as we slide into an Orwellian world.

Returning to Scotland, there is a special reason why the government is anxious to suppress any recognition that that Scottish independence could be successful. As John Stevens makes crystal clear in this latest video for the Federal Trust, the loss of Scotland would be a mortal blow to both Brexit and the Johnson government. They are desperate to stop it.

The content of the offending blog, which determined investigators can find archived here, is an optimistic and cogently-argued assessment of Scotland’s prospects as an independent country in the EU. It was reviewed in Scotland’s National newspaper and welcomed by leading independence politicians, before its sudden demise.

We live in a world where our precious freedoms and access to unbiased information is under threat as never before. Read Central Bylines while you can.