Carolyn Thornborow discusses planning applications and a reform to how they're proposed to residents. 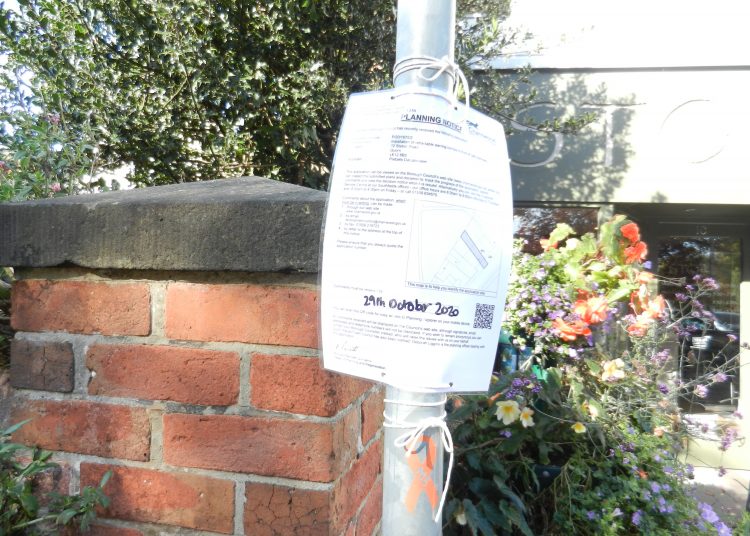 This photograph shows the first (and often only) notice that most of us ever have of a planning application in our neighbourhood. It’s an A4 piece of paper tied to a lamppost with a bit of string, at roughly the level of most people’s eyesight.

But for how much longer?

The authors of the government’s white paper on Planning for the Future which was issued in August of this year have something of an aversion to these seemingly innocent notices. Rt Hon Robert Jenrick, Secretary of State for Housing, Communities and Local Government, says on page 8 of the white paper:

“We are moving away from notices on lampposts to an interactive and accessible map-based online system – placing planning at the fingertips of people. The planning process will be brought into the 21st century.”

Words to this effect are repeated throughout the white paper. The department obviously thinks that bits of paper tied to lampposts are just ‘so last century’. Last century they might be, but they work. As you wander down the High Street to fetch your shopping, you see a notice and go over to have a look. You can see immediately the sort of thing that is being proposed and where and what the deadline might be for commenting on it. You don’t need to have great IT skills or even a computer or smartphone… it is so easy.

I am the Chair of Planning on our local parish council. As such, I have been involved in constructing comments to be sent to our local MP and Mr Jenrick. The parish council has written to our MP as follows:

“We are concerned that the move to make the entire planning process digital may have some advantages but will also exclude many people from being involved, and thus undermine local democracy. We do not consider this to be acceptable”.

A fellow councillor spoke of ‘using automated systems that would enable them to run circles round any individual or smaller body’.

“Residents will be able to engage in a much more democratic system that is open to a wider range of people whose voice is currently not heard. Residents will no longer have to rely on planning notices attached to lamp posts, printed in newspapers and posted in libraries to find out about newly proposed developments. Instead people will be able to use their smartphone…”

One of the things that the pandemic has highlighted is the digital divide. It is noticeable on Zoom teleconferences, that many people do not really have a wi-fi signal or a computer which is adequate to cope with the call. How are these people supposed to engage with a fancy digital planning system? Smartphones have tiny screens and are hardly adequate for dealing with large amounts of information or anything of any size. Many people now only have smartphones. This will be a problem, especially for those of us with less than perfect eyesight for close up work.

Even the Conservatives seem troubled. It is a topic that comes up on the Conservative Home website. Neil O’Brien, the MP for Oadby, Harborough and Wigston has been outspoken. He recently published a new policy paper Green, pleasant and affordable, which talks of the need to:

“Give councils borrowing power to buy land and grant themselves planning permission, to enable councils to capture more of the gains from development”.

His vision seems to mean giving more power to local people, not less.

However, it is Theresa May who is the most prominent of the many critics:

“We need to reform the planning system […] But we will not do that by removing local democracy […] Yet that is exactly what these reforms will lead to.”

For once, I agree with her.