Matt Turpin pens a paean to the Parkway – the East Midlands Parkway, that is, the forlorn platform caught in the HS2 debacle. 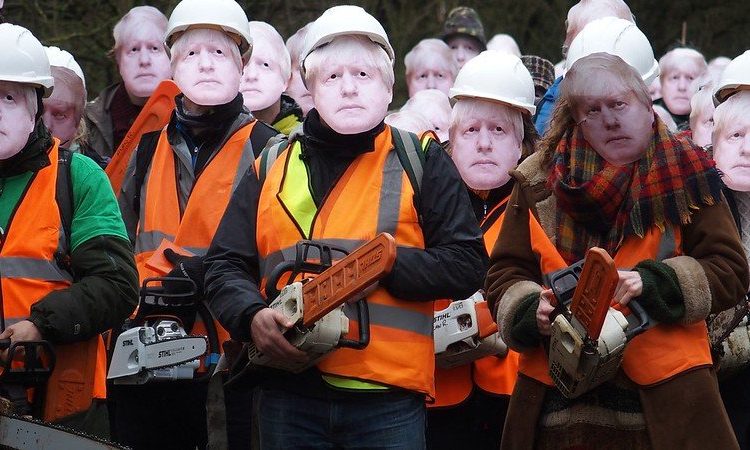 You’ve most likely been there.  Perhaps only as an observer, a passive pass-through. Your train stopped, but no one alighted, no one boarded. If you’d looked up from your phone, or the novel that you’d made decent headway into since pulling out of your origin station, you’d have maybe considered this pause to be somehow ceremonial: a cargo-cult station.

“If you build it, they will come,” Kevin Costner’s hick-hero Ray Kinsella is told in Field of Dreams; and they did, they came. Was a similar voice whispering when they dripped honey into a planner’s ear? “Here! Here you must build this station here! They – commuters, day trippers, tourists freshly arrived from East Midland’s Airport – they will come!”

Perhaps that voice was Ringo Starr’s laconic drawl, promising that the new Isle of Sodor would rise like Camelot from this lugubrious twist of the Trent, where the river trespasses and appears indecisive in whether it is to flow forward or widen into marshland, before gathering its wits and fluvially rushing towards Nottingham and the Humber. This is no place to settle.

No Sodor, no Camelot, in this hinterland. It is a place of passing through, it is a place of flying over,  air traffic descending dispassionately towards the well-worn tarmac of East Midland’s Airport.

So here, this place. Is it a postmodern folly for our times, dreamt up not by port-soaked Victorian eccentrics, but over-caffeinated planners? Look: the platforms, film-set still,  rarely trod. The station interior, glass, chrome; plastic seats that seldom support a brace of business-suited buttocks.

Here is a station in search of a conurbation. This place that no one is really sure, and even less likely to lay a claim, as being Leicestershire, Derbyshire or Nottinghamshire. Instead it is, as if by geographic spite, nowhere, a place cartographers forgot, perhaps purposely.

Yes, there is a nearby village: Thrumpton, with its Hall, where the Byrons once reigned: the incumbent, a well-regarded  biographer of the unspoken-for, wears the ring that once wrapped the finger of the most famous of that family, the one whose poems lit alight a still-blazing burn. The village that sits around it is a beautiful place of old houses, redbrick long inhabited by mustard-yellow lichens and impossibly verdant mosses, snug and soft.

The church appears, as churches do in such places, comfortable in it’s semi-retirement. Like an old boxer, long-gone from the ring, it sits with past glories and a physical stature that still inspires a degree of awe. There will be a cake sale Saturday, and Pilates in the adjacent hall Wednesday week. Bees hum, considering the chocolate-box choice of flowers to guzzle nectar from. A red kite soars on the thermals. Every driveway seems to home a 4×4. Ocado vans busy the verged streets. The station is as distant to them as the Scottish Isles or the misted uplands of Dartmoor.

And of course, the Cloud-Factory. When you passed through, this is where your eye was drawn: the strident steeple of the main tower then the potter’s curve of the cooling towers, rendering all us Lilliputian. Here, where coal roars and smoulders to turn turbines to keep the region rolling, is where the action is. Those who live near here orientate by these chimneys: to see them is to feel some sense of home. As they wind over the horizon as you approach from the south or west, you can almost taste the mushy peas and the Castle Rock ale. Home. 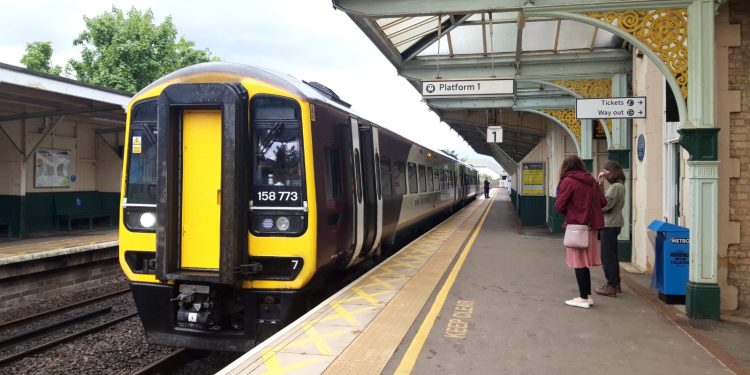 When my daily commute was a mile beside the river-path, I could look across the Trent Valley, over this sprawled antediluvian plain, and what was spewed forth would tell me of the wind direction, the air pressure, the ice in the air. I’d cycle away from it, work, then return with it growing in my outlook. Home.

Yet This Place holds no one’s heart in such a way. On train journeys through places unknown, it is right to speculate “Who lives here? What is it like to be here?” Clues are gleaned from back gardens, through the soundproofed windows of adjacent  flats, from the breaks in embankment that show the visceral anatomy of these places: arterial roads, mysterious pubs, roundabouts that others have embedded deep into their psychogeography.

Yet to stop here at This Place no guesses are forthcoming, even if one draws their gaze from the cloud-spewing towers. An anthropologist would throw in the towel, their cues uncued. Perhaps there is someone on the platform, perhaps someone departs, or climbs on: your suspicion that they are only here temporally: probably right. A man may push a broom around, or did you imagine that?

This Place: with its fittings failing not through over-use, but neglect. Handrails on the hopefully-wide staircases wobble. Damp prevails, no human warmth to see it off.

A melancholy by day, an eerieness by dusk, and onwards. A logistic confusion led me here once, on the shortest day of the year, and, as our diluted, reluctant star sank, its weak light apologetic, I felt a remarkable oneness with my surroundings. Here felt like an end. Not a cliff edge, where the imagination could expand and romanticise deep into the infinite, but an end, a wall, a void of indifference, a heavy, sighing melancholy of a place. Like those post-Soviet central Asian city squares, like those North Korean facades, it is imposed, empty and tragic.

Here, to some, begins the North. Once there were promises of new beginnings, a station to tie up the East Midlands ready for the high speed lines to reach out of London. This would be a place of exchange, a new dawn, a temple to Levelling Up.

Alas, alas. It is not to be. Here, Westminster promises to the Midlands died. It is instead a temple to our fractured, dysfunctional rail network, crumbling yet priced as if each train was a gleaming Bullet-train with complementary sushi and fine wine. Future archaeologists will find this place, and ponder on its significance. Poets may see it as a mediocre Ozyamandis on rails.

Let’s hope their theories and verse tell its true story: this is where the line always inevitably ends.