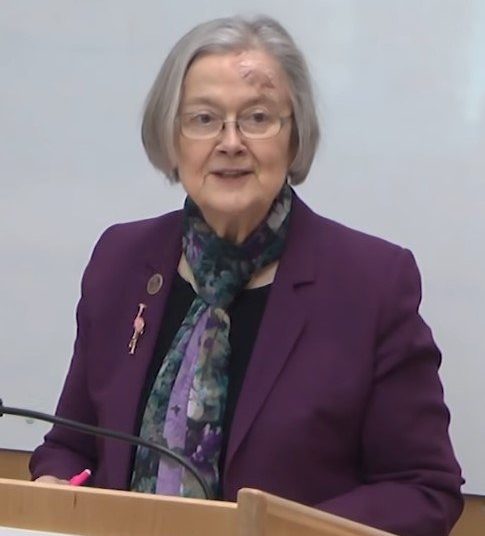 Do you recall what you were doing when the UK supreme court announced its decision on Boris Johnson’s attempt to prorogue parliament last year?

His ‘do or die’ strategy to ensure the UK’s withdrawal from the European Union was meeting resistance in Westminster and he thought prorogation was a possible way past this.

There was much public outrage with a petition signed by over a 1.5 million people. Demonstrations were held around the country including in Leicester, Nottingham, Northampton and Derby. It all ended up in the supreme court, presided over by Lady Hale.

I was watching the feed coming through on the news website and can remember the bombshell. The supreme court ruled (unanimously) that the attempted prorogation or suspension was unlawful and that, in fact, parliament had not been prorogued.

I had never heard of Lady Hale before then but that was the day, in September 2019, that she became one of my heroines.

So, I was very excited to discover that Leicester Cathedral had organised a ‘Question and Answer’ event (via Zoom of course) with Lady Hale. The Dean, David Monteith was cast in the role of interviewer. The event had been widely publicised locally amongst the legal profession. Many of them were on the call, and there was lots of animated discussion going on in the live chat.

The focus of the evening was ‘courage’. Lady Hale pointed out that moral courage is required to do what is right when practising in the legal profession. She also talked about the courage to be upset. A lot of legal cases are very upsetting, especially if they involve the mistreatment of children, for example. It requires courage to be upset.

Courage is required in the sense of overcoming stage fright. This is particularly relevant to practising as a barrister. You step out onto the stage. Although you will have prepared your case, you are not in control and have no idea of how things will unfold or what the outcome will be. Lady Hale commented that barristers generally have a precarious existence as they tend to work alone, without much support and often find it hard to make a living.

Courage is also required to face up to the onslaughts of the media, especially attacks on the judiciary as the ‘enemies of the people’ (to quote the infamous Daily Mail front page). David Monteith commented that many members of the judiciary had spoken to him privately to say how undermined they felt by that particular headline, even though the remark had not been aimed personally at them.

The subject of the how the American judiciary are selected inevitably came up as the hearings for the appointment of Amy Coney Barrett to the US supreme court took place. Lady Hale thought that the way we do it in the UK, with an independent commission and an open, independent process, is the best way and is much fairer than our previous system which relied on a quiet tap on the shoulder. Judges being either elected by voters or appointed on the grounds of their politics are methods that are very open to abuse.

The spider brooch worn by Lady Hale as she announced the supreme court decision about the proroguing of parliament became an iconic image, many adding the spider emoji to their Twitter profiles. Apparently, it was just a way of brightening up a dark and sombre outfit.

The Far and Near Lecture 2020: ‘A lawyer looks at courage’ with Lady Hale was held on Wednesday 14 October 2020. Lady Hale now sits in the House of Lords as Baroness Hale of Richmond.